Most of the time when I’m on the street, I’m on the move. I even photograph while walking without pausing. There is a lot of instinct in the way I operate on the street. I photograph what catches my attention. But sometimes, I happen to ask myself and take more time on a stage. Very often these are scenes with static characters. It’s like in landscape photography. The mountains or the trees in front of us will not move. We can take the time to compose better, to better orient ourselves in relation to the sun … It’s the same thing in certain circumstances with Street Photography.

Through 9 fairly recent examples, I will try to explain to you why I stayed taking photos in the same place and what I expected.

This series was made in Aix-en-Provence near the cathedral. As often in summer, we have in the south, a lot of people who wear a hat to protect themselves from the sun. I had spotted two young girls with their dad who was showing them some details on the facade of the cathedral. I stayed by their side trying to get something interesting. When I am dealing with children, I know that you have to be patient and that after a while something will happen. In the end, one of the last photos taken will be the right one.

This photo was taken in February 2019 during our previous visit to Reunion Island. We were passing through the south of the island and as there was swell we did not go to the water. I took the opportunity to photograph the reckless who ventured into the water. I didn’t know exactly what I was going to take a picture of. I just knew that from where I was, I had the ability to make layers. There were big waves that allowed me to capture interesting photos. But it was when this small group of people arrived that I knew that my patience had paid and that I had done well to work this scene. In the end all the elements were put in place to give this photo that I captured.

Sometimes you have the stuff and you can’t get what you want. That day, I was with the kids at skate park and I posted myself next to some bmx riders. I was immediately attracted by the yellow color of the bmx and also of the t-shirt of one of the riders. I didn’t want to be intrusive and I stayed on the side watching them. On this series, I didn’t get what I wanted. The photos are imperfect. I wanted to have different plans and play with this yellow color. In the end it was a failure. Did I waste my time trying to work on the scene ? No I do not think even if in the end nothing interesting will have emerged from this series.

You have surely already seen this photo in one of my slideshows or blog, this photo of the guy who jumps in the old port. This photo is one of the last in the series produced. This guy is one of the fishermen who sells fishes in the morning in the old port of Marseille. When I saw this guy go off like a bullet and jump into the harbor, I knew he was going to start again or I very much hoped that he was going to do it. This situation was quite unusual and deserved that I stay close to trying to figure out how to take a picture of him. For a moment I was mistaken in trying to take it low-angle to have him on the sky. Sometimes you have to work on the stage to understand how to compose the best. This was the case for this series …

This photo was taken during a demonstration of yellow vests during my short stay in Toulouse. I arrived in front of these gendarmes who were blocking access to the Place du Capitole. I knew I had something interesting there, but it was not enough. As often, it just takes a little luck to complete a composition. This stroke of luck was this gentleman with his mustache. I observed him arguing with the gendarmes. I knew that I had a contrast to exploit there.

This mini series was made in Aix-en-Provence. I don’t look up enough when I’m on the street. This time I was drawn to the shape of this building. I started by taking pictures without anyone in the frame. I pass you the dozens of photos that I made … I already had to understand how to compose correctly before integrating a person in the frame. It was not easy because this street was not very busy. I think I must have had 3 or 4 passers-by for about fifteen minutes. I managed to get the photo I wanted. It was quite complicated because I had to be close enough to people and take them in low-angle to integrate them into my initial composition.

Sometimes things appear like magic. They are so obvious that you would think they were put there for me. This was the case that day in Toulouse. I quickly made a photo because I was afraid that the lady would leave. Yellow and black juxtaposition in the box ! But as often, I try to make the composition more complex. I needed other elements. A quick glance around me to find out what was going to fit into my frame. After a while, I see a lady with a yellow veil walking towards the scene that I am working on. I did well to stay where I am because the result is this final photo. Juxtaposition, gestures. If I had left after my first photo which was already interesting, I would never have had this photo which is much more! 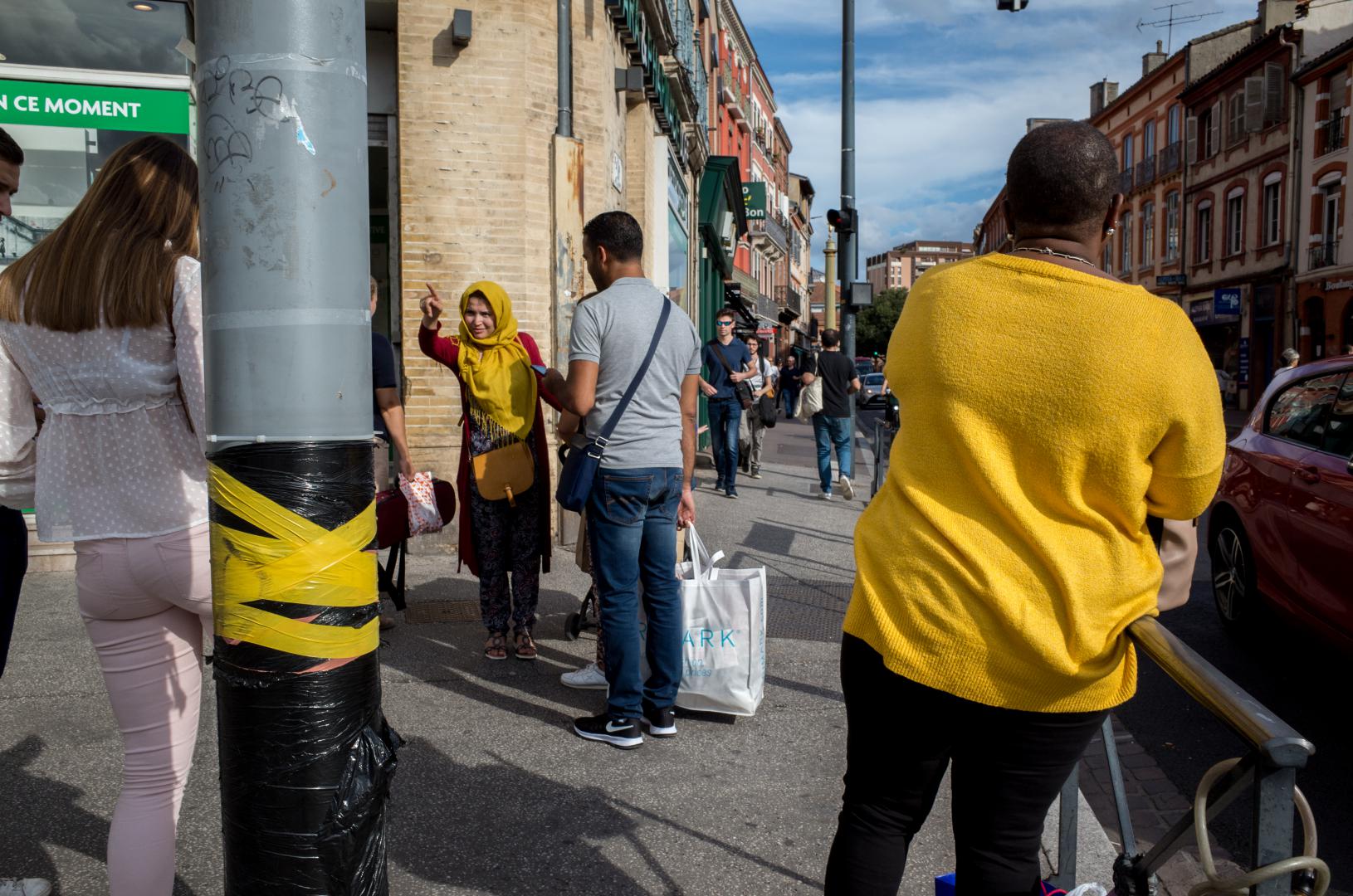 Small series made during the Red Bull Bowl Rippers in Marseille last August. Just 5 photos. Two skaters with their caddies and the guy on the high chair. That’s it, the elements were in place. But as often, the first photo captures the scene. One of the last one is better composed with the looks of the protagonists who leave in opposite directions which add a certain tension in the photo. Characters who do not overlap. The photo is successful.

This last series was made recently in the streets of Saint Denis. I had spotted this Comorian with his colorful outfit. There too I quickly took a photo to capture the scene. Subsequently, I tried to work the scene from different angles to get something. It was my colorful character who had my full attention. I stayed several minutes waiting for something to happen. In the end, nothing will happen. Working on stage will not always reward you. But this proactive approach is very pleasant. As often in the street, the process is the most interesting and pleasant part. The result, when there is one, is just the icing on the cake.

We often do not imagine the work that there was behind certain photos. Sometimes there is luck, but by working on the scene, you create your own luck. This is very often the case for me. When I feel there is potential in a scene, I like to hang around a bit to see what I can get out of it. These examples are not unique. I have my hard drive full. It would be too long and indigestible to tell you about all the times I have stayed to work on a scene.

All photos were taken with the Ricoh GR