I have already told you about this state of mind that drives me when I photograph my own children. It’s stronger than me and I try to photograph them as I photograph people in the street. I have exactly the same approach, keeping the candid feel. I don’t like posed photos because I never get them. Some are good at it, not me … Last week, I went with a group of 22 young people for two days for a mini road trip in a minibus. The opportunity for me to take pictures, while I was weaned lately with Ronan’s injury (Moreover, he is much better!). 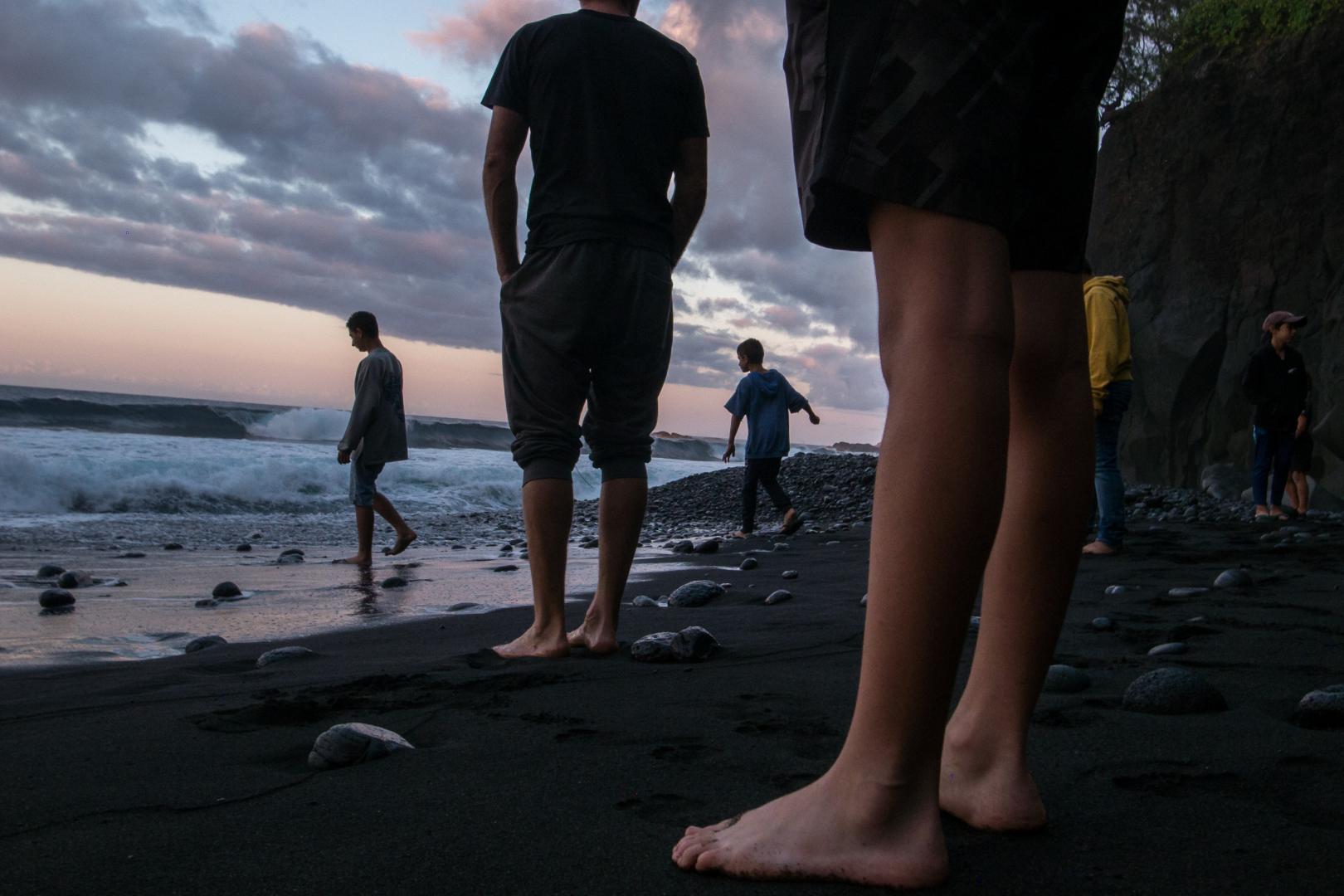 We left for two days to tour the island’s skate parks. I thus documented these two days for the parents but also for myself. In the end I would have taken 500 photos and I used my Ricoh GRD4 and only 3 batteries. I chimp a lot when I take pictures, which explains the low number of pictures for 3 batteries. But what is more revealing is the autonomy of the Ricoh GRD4 over these two days. The Ricoh GR3 would not have even lasted a morning … When I left, I still wondered if I would not ran out of battery. We were in complete autonomy and since we were camping, we were already rationed in water, so don’t even count on having an electrical outlet! Note that I managed to spruce myself up with just 1 liter of water. It goes without saying that after two days with young people in the mini-bus, we were driving with the windows wide open!

I was trying to document these two days mainly for the parents. The problem is that today with smartphones, everything is shared in real time. Videos, photos. Everything was uploaded on WhatsApp while my photos were still on my memory card and waiting to be post-processed in Lightroom when I got home. It was quite frustrating as I couldn’t share the photos in real time. I would need a Wifi SD card to be able to transfer the files directly to my smartphone, but here too I would need software to transform my RAW files into jpg … In short, a lot of logistics unless I shoot only in jpg. Parents will wait for the photos. We live in a society where everything is going too fast. We want everything without waiting. We share everything and too much without any filter. I’m going to stay old school and take the time to do things. 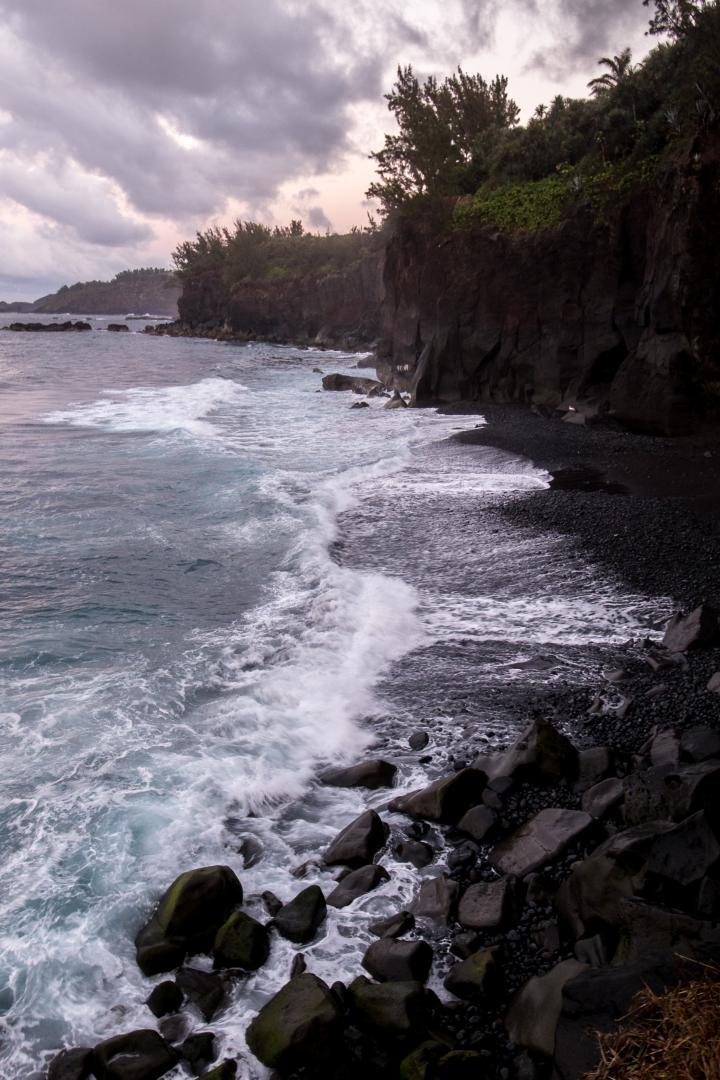 Morning view from the camp site

Besides, in this regard, for some time, you have noticed that I share less photos. Blame it on lockdown ? to Covid-19 ? No, none of that. Reunion Island escapes the recent re-containment that takes place in mainland France. The virus is still active among us, but remains at a not yet alarming threshold. This is the status quo here. We pay attention, we wear the mask, we avoid gatherings of people, we restrict ourselves to barrier gestures. The Prefect does not rule out having recourse to curfew or lockdown if the figures deteriorate, but for the moment life continues with us. The reason I share less is that I want to stop diluting my work by showing too many photos. I know very well that my website and my Blog are places where I can show my work without filters, but that’s no reason not to be more demanding with what I show. 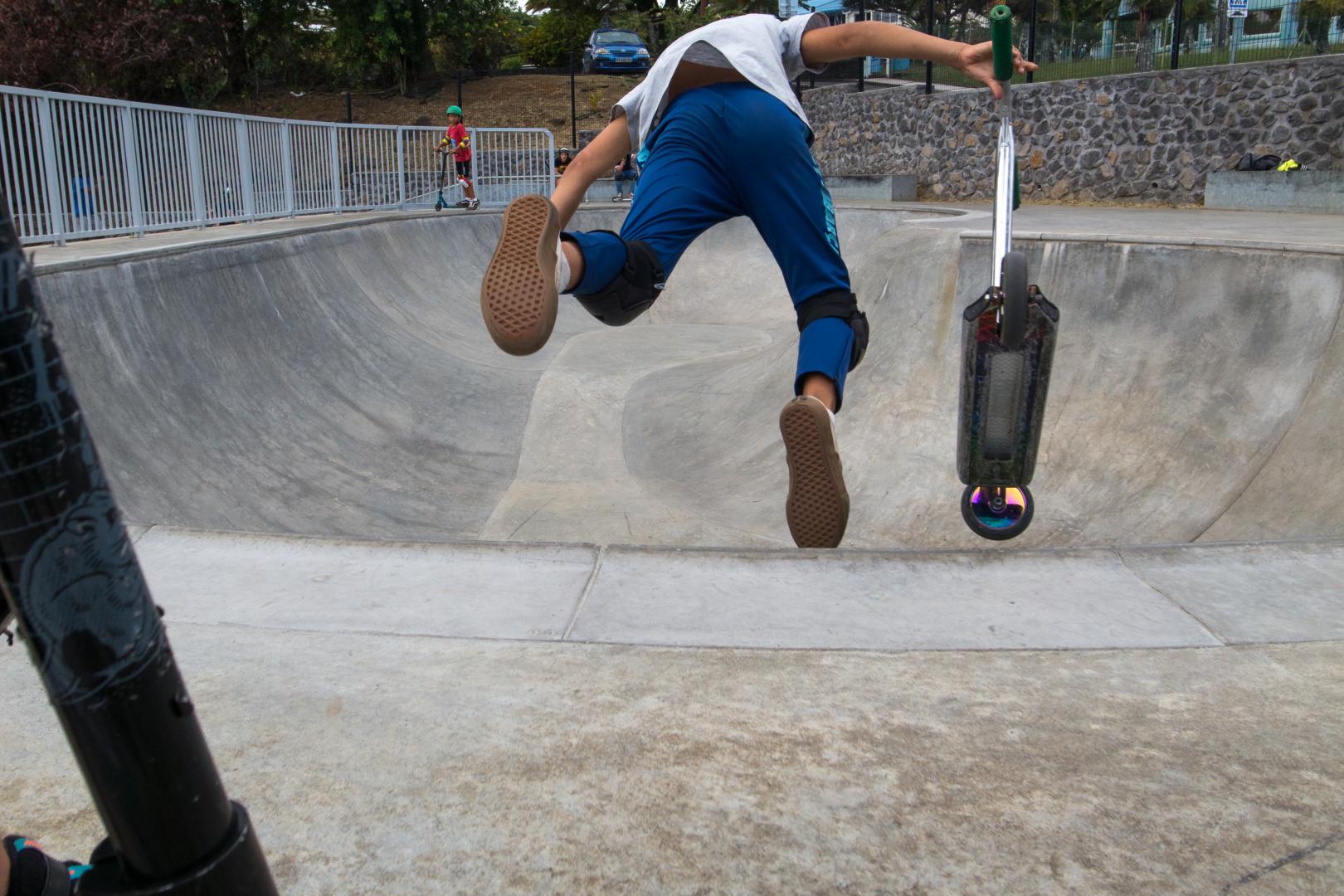 So I now share my photos in monthly form with slideshows that I post on YouTube. In September it was 30 photos, but I think it’s still too much. For the month of October, I decided to share only 20. I do not exclude further lowering this figure to show you only ten photos per month. You can find the two slideshows for September and October below.

Let’s come back to the subject of this Blog, namely the Street Mindset. I applied myself to photographing the children who took part in this outing with this famous Street Mindset. Even though I photographed mainly for parents, I always kept in mind the possibility of taking some very typical Street Photography photos. The challenge was to be careful that the children were not recognizable in the photos. However, I photograph children in the street a lot without censoring myself. But the situation here was different. I was accompanying an outing that was not organized by me and I did not want to overwhelm the organizer of the outing who was responsible for the image rights of the children present during this trip to the skate-parks . In the street, I am responsible for my actions and it is I who would answer in case of problems. There clearly this was not the case. 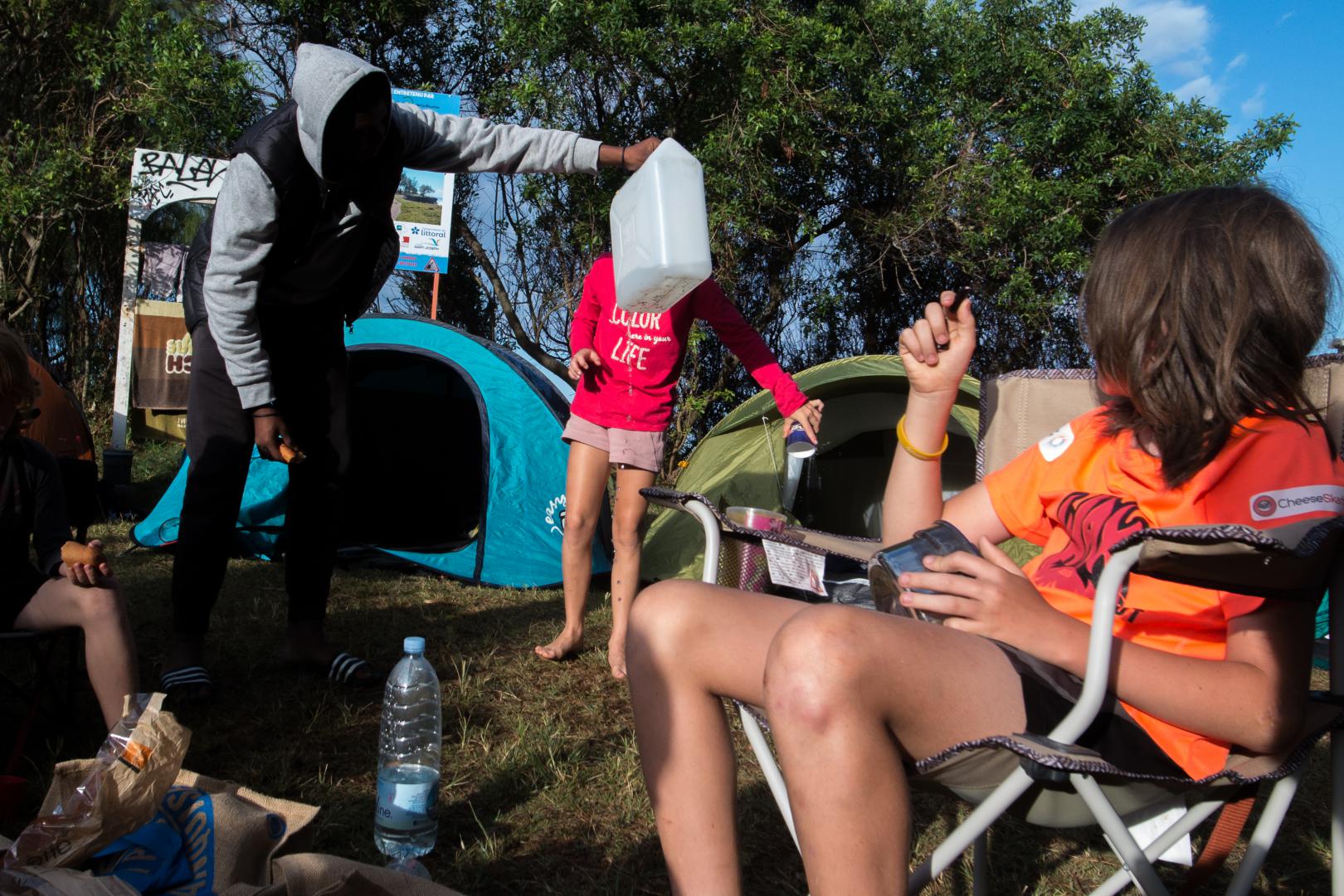 It’s really not obvious, but it was a little challenge. All in all, I only have a small handful of photos where I managed to do what I wanted. In the end, the parents were delighted with the photos that I gave them. A mom even told me that my photos tell stories. I don’t think there is a better compliment than this. And of the 500 photos, barely 4 purely Street photos. It’s already a lot and I consider myself happy to have been able to make them. 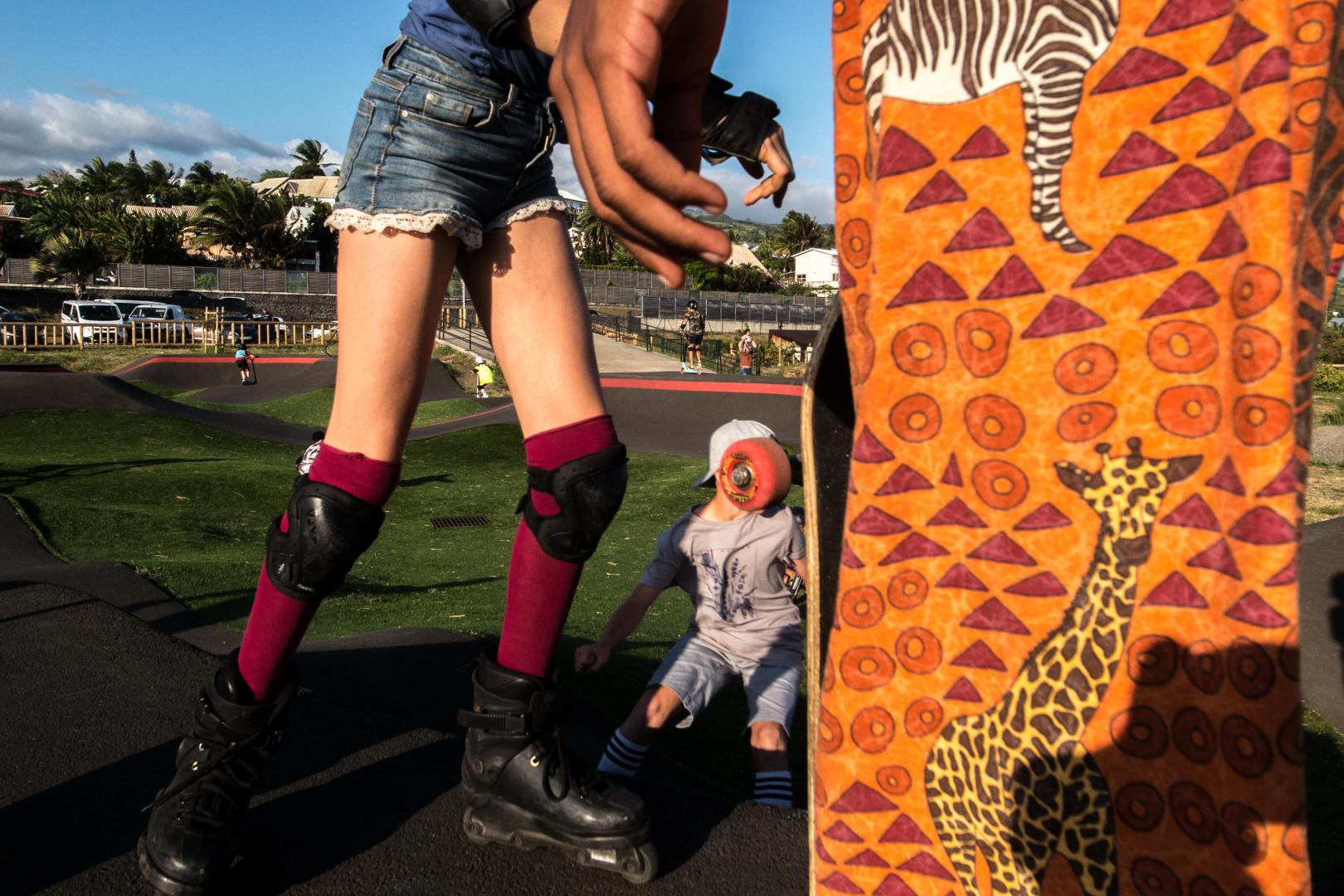 All the photographs were made with the Ricoh GRD4.